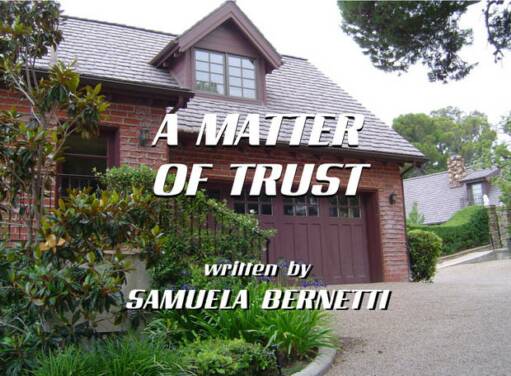 Back in the main room, Harv’s sudden departure had made Pete even more nervous. What had started off as a relatively easy bank job was growing more complicated with each passing moment. He paced back and forth, between the wounded guard and the hallway, muttering increasingly incomprehensible words.

Hardcastle watched him, monitoring his every move. He knew Harv could trigger a red alert from the back any minute and he feared Pete’s reaction. He knew too well that the worst moment in a hostage situation was the instant the kidnapper realized there was no way out.
It occurred to him just then that Harv might be reaching the same fatal conclusion. And he’d intentionally sent the man to hunt Mark. The kid had a gun, but he would hesitate to use it, no doubt about that. Harv would never return that favor, no doubt about that either—he’d already been proven to be trigger-happy. Hardcastle glanced over at the guard. A shot in the chest. Blurry images of a ravine started to play in his mind: a body at the bottom, leaves all around.

Not this time, he thought angrily.

Holding tight to that resolution, Hardcastle roused from his day-nightmare and scanned his immediate surroundings, looking for something within reach that would work for what he had in mind. He finally spotted the right tool for the job, his eyes lingering on the thing for a second.

That will do the trick. It has to do it.

Hardcastle eased back almost imperceptibly toward the nearest desk, reached behind him and resting his palm on the paperweight sitting there. He wrapped his fingers around the object until it was nestled firmly in his hand. Then he straightened his arm slowly, letting it come to rest against his side.

He addressed Pete. “You’d be doing yourself a favor if you let the police in. I’d testify in your behalf before the court.”

Pete stopped short and fixed the judge with a lopsided grin. “You would?” he enquired sarcastically.

“Sure, you didn’t do the shooting, did you? I’m a judge, you know, I still have friends th—”

“Yeah, you have friends in prison, too,” he said, as he walked toward Hardcastle. “I’ve been inside. Can you guarantee I won’t go back there?” He stopped in front of the judge, waving his gun under his nose. “I don’t think so,” he said, without waiting for an answer.

“This is a big mistake. You’re gonna regret it.”

“Now.” Hardcastle hurled the paperweight onto Pete’s foot with a perfect snap of his wrist.
Pete let out a yell of pain and automatically lifted the offended limb, bending over to grasp it. He’d barely realized he was standing on one foot with his gun aimed down, when Hardcastle’s fist crashed into his nose. The next thing he knew he was sprawled on the ground, stunned. Without missing a beat, Hardcastle snatched the gun.

“Get up!” he ordered, grabbing Pete’s shirt and lifting him as if he were a puppet. Then he turned to the bank clerk. “Get out there,” he said pointing his finger at the door. “Move slowly, keep your hands up. Give them the all-clear.”

Then he set out, pushing his reluctant and unsteady prisoner ahead of him down the corridor.

Hardcastle had already considered every possible scenario by the time he halted his captive at the bathroom door. No gun had been fired, so the chances were good that Mark had managed to disarm Harv. Still, the judge wouldn’t risk his friend’s life on assumptions, no matter how reasonable they were. He pressed his ear against the door.

After that he looked at Pete and jerked his head. “Call him,” he ordered in a hoarse whisper.

“Harv!” the man called out tentatively. “You in there?”

Hardcastle reached for the doorknob and turned it cautiously, then pushed the door part-way open slowly and looked inside. Through the narrow space he saw McCormick on the floor, face down and unmoving. He felt his breath catch. He flung the door open, dragging Pete behind him. He dropped to one knee next to Mark and, for the second time that morning, felt for the kid’s pulse while his own heart skipped a couple of beats. Then he closed his eyes, sighed heavily, and started breathing again.

He grasped McCormick by the shoulders and gently turned him over. Some blood was oozing out of a fresh cut on the kid’s forehead but he was breathing steadily, too.

As relief flooded through him, Hardcastle heard a series of light steps behind his back. He raised his gun and made a quarter-turn, aiming it at Pete.

Pete dropped the gun he’d just scavenged from where Mark had tossed it earlier. He straighten and stood with his hands up.

His stance hadn’t changed much when Frank stormed into the room. He looked at Mark, then at the judge. The lieutenant took a deep breath, closed his eyes and heaved a huge sigh. He reached into his tactical vest for his radio and issued an all-clear, along with a request for medical assistance.

Frank put the handcuffs on Pete personally. Joey, now scowling sullenly from below the sink, was cut loose and handcuffed as well. Harv was the last to rouse, lifting his head and trying to spit at Hardcastle before Frank stiff-armed him up and handed him over to one of the arriving back-up officers. The three men were escorted out just as the paramedics arrived with their stretcher.

Mark groaned when his lids were lifted and a penlight was pointed at his pupils. The paramedics seemed pleased with the response. The older of the two flipped his radio unit on and relayed their findings to his base hospital while Hardcastle listened in anxiously. It was the usual gibberish that didn’t tell a bystander very much. About all he caught from the return transmission was the final phrase “—and transport.”

“Where you takin’ him?” the judge asked, as the paramedics signed off and readied to leave. “And how’s he doing?”

He got a questioning look from the older paramedic. Hardcastle glanced down at himself and realized he must look like he’d been through the wars, maybe like he needed a paramedic to check him out as well.

“Right,” Hardcastle said, without any protest or hesitation, and when that admission didn’t seem to be carrying much weight, he hooked a thumb at Frank and added, “and this guy is in charge of this crime scene; he needs to know where to contact the victim and how soon he’ll be able to give a statement.”

“Na’ today,” the guy on the stretcher muttered.

Everyone looked down at him. Hardcastle grinned.

“St. Mary’s,” the paramedic said, aiming the answer toward Frank, “closed head injury and facial trauma. Stable, for now. Is that enough for your report?”

Hardcastle didn’t mind being ignored. He sidled in next to the stretcher and patted McCormick’s shoulder. “See ya in a little bit. You just take it easy for a while, okay?”

As the paramedics loaded their gear and rolled, Mark waved—his right hand just barely clear of the stretcher, his eyes still closed. Then the stretcher and its occupant were gone.

Frank looked at this friend. He’d rarely seen him that exhausted. “You look like you could use a stretcher too, Milt.”

“I’d rather drive there,” Hardcastle answered as he trudged out into the hallway.