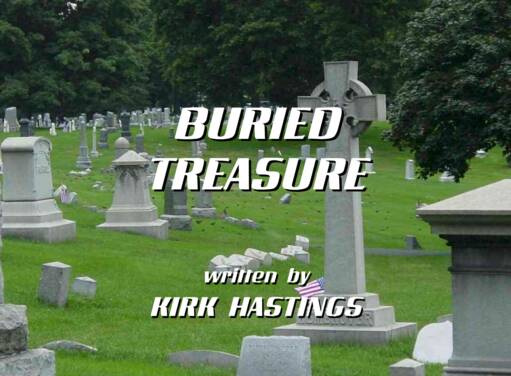 “Isn’t it great?” Mark said. “There’s this old guy who lives in a little building on the grounds who serves as a caretaker. Let’s relive old times and go give him a fright!”

Cindy looked down at herself.

“In this outfit?” she said.

Mark stared at her. “Well, maybe not. ... We’ll have to keep out of sight. We’ll just make some strange noises and make him wonder what’s going on.”

“Oh, Mark, I can’t believe you’re doing this! I thought you had grown up and gotten more mature over the years since we were high school kids!”
`
At this Mark looked a little sheepish. “You don’t think it’s a good idea?” he asked.

Cindy put her hands on her hips and stared at him with a smirk of disapproval on her face.

Mark shrugged his shoulders. “Okay, okay, maybe it was a dumb idea!” he apologized.

“Hardcase and I haven’t had any excitement in our lives for a while now, and I guess all this Halloween party stuff has been scrambling my brain!”

He looked at Cindy in her tight-fitting, fetching leotard.

“However, since we’re here, and alone, we could still make the best of the situation,” he murmured, sidling closer to Cindy.

“Now you’re talking,” she replied, throwing her arms around his neck.

They kissed for a couple of minutes, before Mark stopped and put his nose up in the air, like he was listening to something.

“What is it?” Cindy asked him.

“There’s a noise coming from over there,” Mark said, pointing behind Cindy’s back. “It sounds like someone digging.”

Cindy could hear it too. Taking her hand, Mark led her in the direction of the sound.

As they moved along, suddenly they both noticed how dark it was. From somewhere nearby an owl hooted. A slight breeze was blowing, and it made the leaves on the ground rustle as they skittered eerily across the ground. In the sky, wispy clouds scudded across the face of the pale sliver of a moon.

As they moved among the tombstones, Mark thought: what a place to be on Halloween night!

However, they continued on. Before long Mark spotted some dark shapes moving just ahead. As one they both ducked down behind a large gravestone.

Mark peeked out from behind the edge of the stone marker.

In the darkness he could just barely make out two men. They both had shovels in their hands, and they were in the process of digging up a grave!

Totally outraged by this discovery, without thinking Mark stood up and yelled “Hey!” at the men.

The men saw him. Immediately they both dropped their shovels and started to run in the opposite direction.

Mark ran after them.

Not knowing what else to do, and not wanting to be left alone in the dark, Cindy got up and ran after him.

The chase went on for only a minute or so. Both men reached the stone wall around the cemetery’s perimeter and deftly leaped over it. By the time Mark got to the wall he peered over and saw the men roar off down the road in a late model sedan.

Cindy came up behind him.

“Did you get a look at them?” she asked, huffing and puffing.

“No,” Mark replied. “It was too dark to see their faces. I couldn’t catch a license plate either.”

He put his arms around Cindy and held her for a moment while they both caught their breath. Then they both headed back toward where they had seen the men digging.

“What do you suppose they were trying to do?” Cindy asked.

Mark shook his head. He couldn’t help thinking about those old late-night movies he watched all the time, where people like Boris Karloff and Bela Lugosi were always digging up graves in order to sell the bodies to questionable medical establishments or guys like Dr. Frankenstein to use in horrible experiments.

When they got back to where they had first spotted the men, they stopped at the edge of the hole the pair had been digging.

They looked down. In the hole was a partially exposed coffin.

“Oh, Mark,” Cindy moaned. She turned away and put her face against his shoulder.

Mark held her for a moment. Then he noticed something.

“Hold on a minute,” he muttered. He pushed Cindy away and jumped down into the hole.

“Mark, what are you doing?” Cindy exclaimed, horrified.

Mark ignored her. He studied the top of the coffin, which was sticking out of the dirt. It was one of those types that had a half-lid, where just the upper half of the coffin could be opened.

He examined it as best he could in the dim light. There were some pieces of paper sticking out from under the edge of the lid.

He pulled one out.

It was a hundred dollar bill!

His curiosity now inflamed, he pulled at the edge of the coffin lid. It was not locked, and it came open fairly easily.

The coffin was stuffed full of money!

When Mark and Cindy got back to Gull’s Way they ran inside and pushed their way through the partygoers, looking for Hardcastle. They finally found him near the punch bowl, grimacing as he tasted it.

“Oh — McCormick,” he said as he noticed him and Cindy. “Try some of this punch. You’ll love it. It’s my best recipe yet.”

“Never mind the punch, Judge!” Mark told him. “You have to come with us right away!”

Hardcastle stared at him.

“Come with you?” he snapped. “Whattaya mean, come with you? I’m right in the middle of my Halloween party here!”

“Judge, trust me, this is really important!” Mark insisted.

Just then Lt. Carlton came up to Hardcastle. He was dressed as Wilt Chamberlain, from his days with the Los Angeles Lakers.

“Great party, Judge!” he gushed. “But I gotta tell ya, the punch leaves something to be desired!”

With a wave of his hand Hardcastle brushed this comment off. When Carlton shrugged and walked away, Cindy took Hardcastle by his arm.

“Judge, Mark is right,” she told him. “You really should come with us. We have something to show you that you’re not going to believe.”

Hardcastle looked at her. He could tell from the expression on her face that she was deadly serious. He sighed. Then he replied: “Oh, all right. Just let me go upstairs and change my clothes first, okay?”

Hardcastle pushed his way through the crowd and headed upstairs. After a minute he came back down, and the trio went outside to where Hardcastle’s pickup was parked. They all climbed in, and Hardcastle started the engine.

“I can’t believe I’m leaving my own party right in the middle here!” Hardcastle growled as they headed down the driveway. “What in hell is this all about?”

“Judge, you won’t believe me if I told you!” Mark told him. “We’re just gonna have to show you!”

Mark directed Hardcastle down Pacific Coast Highway to the turn off. They headed down this road to the front gate of the cemetery, where Mark told Hardcastle to stop.

“Oh, you’ve got to be kidding me!” Hardcastle grumbled. “What is this, some kind of a Halloween prank?”

Hardcastle pulled a flashlight out of the pickup’s glove box, and they all got out. Hardcastle clicked the light on, and Mark led the way to the still-open grave. While Hardcastle and Cindy stood next to the hole, Mark jumped down into it.

“I didn’t open this one, Judge,” Mark called up to him. “And I certainly didn’t fill this coffin with what’s inside it!”

Hardcastle shined his flashlight down into the hole. Mark yanked open the lid of the coffin, and the flashlight beam showed it to be stuffed full of money.

Before Hardcastle could say anything, a shot rang out, and a bullet glanced off a nearby grave marker.

Hardcastle immediately pulled Cindy down behind the marker with him, just as another bullet glanced off of it. The judge pulled a pistol out of his own pocket, and started to return fire in the direction the shots had come from.

Mark scrambled up out of the grave and joined the other two behind the grave stone.

“You brought a gun with you?” Mark questioned.

“I never leave home without it, kid!” Hardcastle replied.

“Those grave diggers must have come back with some help!” Mark explained to Cindy.

“Yeah, well, help or no help, Henry and me’ll give ’em a run for their money!” Hardcastle replied, firing off another shot.

“Don’t you just love this guy?” Mark told Cindy as they ran. “Any sane person right now would be ducking and covering — but instead ol’ Hardcase decides to chase and shoot!”

This time the shooters ran out the front gate of the cemetery, and jumped into a sedan parked not far from Hardcastle’s pickup. The sedan’s wheels squealed as the shooters turned it about and roared off down the road in it.

Hardcastle reached his pickup first. He jumped into the driver’s seat, gunned the engine, and pulled the truck around in a circle. Mark and Cindy managed to grab the passenger side door and jump into the cab just before the pickup took off after the sedan.

“No kidding!” Mark retorted, as he and Cindy hung on to each other for dear life.