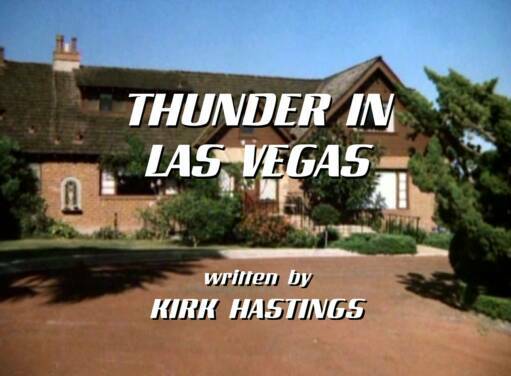 Later that afternoon Barbara, Mark, and Hardcastle were back in the coffee shop at the Sahara Hotel, after hours of filling out forms and being interviewed by the Las Vegas police.

“Well kids, it appears that you shouldn’t be having any further problems with Cody Automotive,” Hardcastle was saying. “With Cousin Willie and Mrs. Cody now in that big automotive graveyard in the sky, and Martin all nicely tucked away in the House of Many Doors for the rest of his natural life, there aren’t any other members of the Cody family left to give you any trouble. It’s only a matter of time now before Cody Enterprises closes its doors for good.”

“Martin didn’t have any kids?” Barbara asked.
“No kids.”

Mark turned to Barbara. “B.J., have you ever thought about mass-producing the Coyote? You could make a lot of money with it.”

Barbara shook her head. “No, not really,” she replied. “I’m not really into the automotive thing like my father was. The Coyote was his car. And now it’s yours, Mark. I’m satisfied to leave it at that. Besides, I’ve got my future legal career to focus on now.”

“Yeah, me too!” Mark agreed. “Hey, maybe we could eventually hang a shingle out together — you know, like, ’Johnson & McCormick, repossessions our specialty!’”

“You better graduate from law school first, kiddo,” Hardcastle reminded him. “At the rate you’re going, Barbara will be retiring just about when you’re first getting started!”

Barbara laughed at this.

“You see what I have to put up with here?” Mark groused.

Hardcastle ignored that. He looked at his watch. “Well, it’s just about coming up on chow time,” he said. “How about we all go somewhere nice and get a big fat steak for dinner?”

“Judge, it’s been a long night and a longer day,” Mark replied. He gave out with a big yawn. “Frankly, I think I’d rather just go back to the room right now and get some shuteye for the next few hours. We can go out later.”

“I agree,” Barbara added. “I’m pretty beat myself. Trying to keep up with you guys can really wear a girl out!”

“All right, party poopers!” Hardcastle snapped. “I’m twice your age, and I’m not tired! You two go to bed. I’ll go gambling or something for a while, until you can both somehow find the energy to eventually go out with me and enjoy the exciting Las Vegas lifestyle!”

Mark and Barbara both smiled lamely. They got up from the booth and headed back to their rooms, leaving Hardcastle behind.

After a minute the Judge got up too, and made his way outside to the Sahara’s parking lot. As he did, he noticed a couple of big bruisers in suits off to one side trying to manhandle another man dressed in a tuxedo. He walked over to investigate.

“Hey, what are you guys doing?” he challenged.

“What’s it to you, pops?” one of the bruisers replied.

Hardcastle held up his ID card with the police badge attached to it that he had been given at his retirement party.

“I’m Judge Milton C. Hardcastle. That all right with you, sonny?” he replied.

At this revelation the two men backed off. They both scurried away.

“Thanks a lot, Judge,” the rescued man said, straightening his coat and tie. He was a nice-looking man, probably in his early 50s, with dark hair that had a tinge of gray at the temples.

“Glad to help,” Hardcastle told him. Both men shook hands.

“And you are?” Hardcastle asked.

Hmph Hardcastle thought to himself. That’s an odd name.

The men parted, and Hardcastle headed for his pickup.

The other man stepped back into the shadow of the hotel building, where he pulled a shiny silver pen out of his pocket. He pulled the cover off the pen, reversed it, and then pulled up a little antenna from the barrel.

“Open Channel D,” he said into the pen.

Meanwhile, Hardcastle climbed into the cab of his pickup truck. He pulled some brochures about Vegas out of the glove compartment. After looking them all over, he sat back and crossed his arms while he thought about what exciting thing he could do in the City That Never Sleeps.

Before long, he was fast asleep. 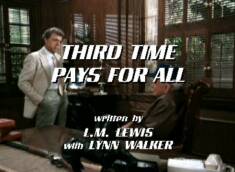 I heard from some of my old ’business partners’, if ya know what I mean,“ Sonny gave the judge a look filled with significance, ”that Jersey Joe Beiber’s on the warpath. You know his final appeal was just denied.“

”I heard that. The court didn’t even allow it to be presented. So he’s looking at a long ride up the river with no paddle. ’Bout time, too, if you ask me.“

”Ain’t that the truth. But get this. He’s not real happy with things right now. You know, looking for some revenge, and he’s got a pretty hefty incentive hanging out for the guy who takes down the vigilante judge that sent him up.“ Sonny lowered his head meaningfully and gazed up from under his brows at Hardcastle. ”You get my drift?“

”Listen, I’m only going to ask you once. Why the hell are you here?“

”What,“ Sonny managed to look mildly offended, ”a guy can’t do a good deed for a friend of his kid’s?“

Mark’s lips tightened as though he were holding in his first and most instinctual response. After a long and judgmental moment he replied, ”Some guys for some kids, yeah. You—“

”Well, I don’t expect you to believe me,“ Sonny said.

”You’re not getting it, Sonny.“ He half-recognized the confidential growl he was employing as something he’d heard Hardcastle use.

”Getting what?“ Sonny asked nervously.

Mark let out a long sigh, shook his head, and started up again in slow, measured words. ”If it turns out you haven’t been on the level—if you do anything that puts him more at risk …“

Unlike the growl, this was all his. As unspoken threats went, it had the ring of absolute sincerity. Sonny swallowed once and seemed to force another, fainter grin, but he had the decency not to defend himself any further.

Mark felt his jaw go slack and pulled it up again, if only to swallow hard. He thought he’d been keeping his suspicions about Sonny under wraps. As little kinship as he felt with the man, it still amazed him how much he could be embarrassed by Sonny’s failures.

”I’m sorry,“ he finally blurted out. ”I should’ve said something.“

”Why?“ Hardcastle asked, looking genuinely surprised at the admission. ”I mean, he’s your dad and all. I think that gives you some kinda right to keep stuff between you and him.“

”But this—it affects you.“

”Some,“ Hardcastle shrugged, ”yeah, I guess.“

”You guess?“ Mark shook his head in disbelief. Hardcastle might be the master stoic, but this was taking the practice to extremes. If the man suspected Sonny was a hazard, he ought to be raising a ruckus and shaking the truth out of him.

He froze for a half-second, and moved closer, soundlessly.

From his new position he could make out the anxious cadences—Sonny’s side of a telephone conversation.

Mark resisted the urge to hustle into Hardcastle’s bedroom and pick up the other extension. It would be bound to tip Sonny off.

Mark wasn’t sure about the scar, but the rest was close enough. He shoved Dylan in the direction of the passenger door and popped the locks.

”It’s a clean alias, and he’s got papers to go with it,“ Freddie said, climbing in on the opposite side. ”His real name is Victor Pompano. But decapitation isn’t his M.O.“

He pulled out with a sharp turn of the wheel and took the corner too fast.