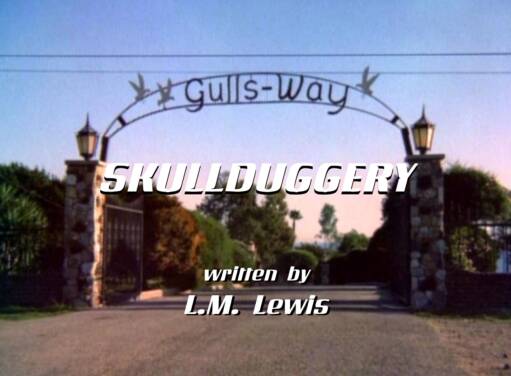 The lot of the Bradford Theater was nearly full on a rainy night two weeks later. McCormick finally parked the truck at the end of the furthermost row.

“Just because she sent us season tickets doesn’t mean we have to use ’em,” Hardcastle grumbled as he climbed out, pulling his collar up against the elements.

“Well, actually, it does, at least once. After this I promise we can give them away.” Mark’s smile slid into a grin. “Claudia likes plays. We can stiff Frank with ‘em.” He glanced down at his watch. “But we better hustle,” he said, picking up his pace.

Hardcastle followed him, thinking it felt a little odd to be entering by the front door. A crack of lightning sent them scurrying even faster. He gazed up at the glistening marquee as they passed under it.

“I dunno, Arsenic and Old Lace?” he shook his head doubtfully.

“It’s been a sell-out,” Mark assured him. “Theo says apparently there’s no such thing as bad publicity. Anyway, it was already in the line-up when the Hamlet disaster happened. Too late to put in a substitute.” He held open the door and let the judge pass by.

Inside the foyer they shook themselves off and doffed their coats, passing them to the young lady at the check-room counter. McCormick froze as she handed the tags back to him.

“I decided to stick around.”

Mark turned to the judge and said, “This is Rory’s stalker, the one I was telling you about.”

She sighed heavily. “I resent that term.”

Hardcastle studied her sharply. “You know Frank might want to have a word with her—about Rory, I mean.”

“Lieutenant Harper?” she said primly. “I already talked to him. In the meantime, Rory’s lawyers okayed an official biography.”

“Interviews and everything?” Mark asked.

She made a face. “Yeah. So far I’m coping. He’s pretty nice when he’s not murdering people.”

“Anyway, they think it’ll bolster his insanity defense. And until I get the advance, this pays the rent.” She tapped the tips jar.

“Of course.” Mark reached into his back pocket for his wallet. “And I’m glad to see you’re staying out of trouble.” He stuffed a folded-up bill in through the slot.

“Thanks,” she said, still gazing at him rather intently. “You know,” she added, “you’re kind of interesting.”

He turned and bolted, almost knocking over Hardcastle, who was standing stock-still, looking up at one of the elegantly framed black-and-white photos that adorned the lobby.

“Huh?” Mark said, having followed the judge’s gaze and encountered a vaguely familiar face. It took him a moment to place it and then he said, “You know, I thought he was just one of the local amateurs—Hamlet’s dad is a kinda small role, isn’t it? What movies was he in?”

Hardcastle had obviously already looked at the small metal name plate mounted on the bottom side of the frame. He leaned forward again, as if to be absolutely certain.

“None,” he said, in a decisive way that was probably intended to be nonchalant. “Says here it’s Amos Bradford.” He frowned, looking puzzled. “I never met him—I mean, not in the flesh. Looks kinda familiar though.” He squinted at the photo then at McCormick again. “What were you saying about the ghost?

Mark looked up at the man who’d really, really wanted to star in Hamlet. ”Ah,“ he swallowed hard, ”nothing.” The lobby lights dimmed twice.

Hardcastle looked down at his ticket and sighed with grim reluctance. ”The show must go on.”