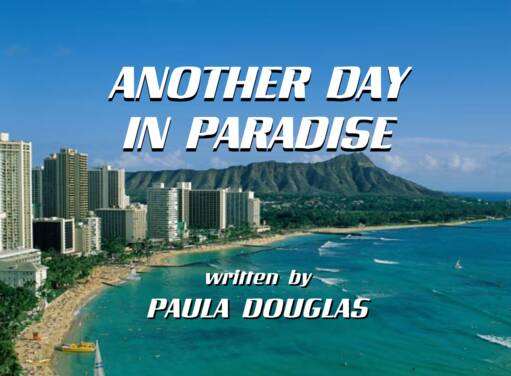 “Can I have your attention, please? United Airlines Flight 3, 747 Friendship Service to Los Angeles International Airport, is now available for boarding at Gate E7. All passengers, Flight 3…”

“That’s our cue, kiddo,” Hardcastle said. He turned to smile at Noelani. “Thanks again for the lift,” he said. “And for pulling our feet out of the fire. I guess even the Lone Ranger and Tonto can use an assist from Wonder Woman once in a while.”

She shook her head. “You can’t be serious. After everything you guys did for me and my sister…I think I owe you a lot more than a ride to the airport.” She threw her arms around the Judge in a bear hug that he tolerated with a pleased expression for about two seconds before he realized what he was doing, and then he frowned. “Now, now, don’t slobber on me,” he groused, but she kissed his cheek anyway.

“Listen now,” Hardcastle said, “You have my phone number. You let us know if you need anything, anything at all, when this goes to trial.”

“I will,” she promised. “Oh, I talked to the DA this morning: Rossi’s got to explain to the commissioner in person why she only had two cars on the mountain when he told her to give you four. He says the rumor is she’s going to be going on a two-week unpaid vacation. Oh, and Toller completely rolled over on Carson.”

“He wants to testify that Carson killed Kanai. He says Carson murdered two other clients of theirs, too. Do you think he’s telling the truth?”

Hardcastle shrugged. “Some of it, anyway. He’s going to try to make himself look as blameless as possible. They were both in on it together. If Carson doesn’t say the same thing about Toller, I’ll be surprised. They’re both gonna be staring at barbed wire and eating potato flakes for a long time.”

Noelani turned to McCormick, who had been very uncharacteristically quiet ever since they left the hotel. “Mark,” she said. “Thank you. You know, you’re not just reformed. You’re evolved. That’s rare in a man.”

“Any time,” he managed, feeling unaccountably and very suddenly shy. He put out his hand to shake.

She glanced disdainfully at his proffered hand. “Get real,” she said, and then she had his face between her hands and her lips on his. His eyes went wide, and as they met hers she broke the contact and stepped back.

Hardcastle rolled his eyes. “Look at you,” he said. “You’re both blushing up to your eyeballs.”

McCormick cleared his throat; Noelani tossed her head and drew herself up. “Whatever,” she said, and except for the lingering redness in her cheeks she appeared to have forgotten that anything had happened. “By the way: I’m back on the clock at the observatory. And I’m going to be reading a paper at Mount Wilson on October 25.”

“It’s in Pasadena?” she prompted.

“Yes,” she said. “Anyway, I’ve never been to L.A. before, and I’m going to go see Mulholland Drive.” When he didn’t react immediately she added, still in the tone of someone guiding a child through a puzzle, “You can come with me, if you want.”

“Yes!” McCormick finally found his voice. “I want. I mean, absolutely. I’d love to.” He couldn’t stop grinning. “Yes, definitely. I can show you Mulholland. But—really? Mulholland? There’s a lot of other stuff to see in L.A., too, if you’d rather…” She had hiked an eyebrow at him in a now-familiar gesture. “Mulholland is good,” he said. “Mulholland it is.”

“Okay, then.” She pointed to his thickly-bandaged left hand. “Take care of that hand. I want you to show me how to do some of that fancy driving.”

“In exchange for a kung fu lesson?” he asked.

“Don’t encourage him,” Hardcastle growled. “Let’s go, McCormick. Hurry up, before we have to swim back.” He hefted his suitcase and headed for the jetway. 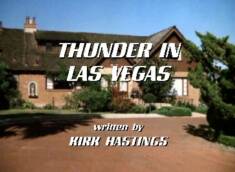 Standing on the stoop was Barbara Johnson. He hadn’t seen her since she had given him the Coyote almost three years ago, and left the area to go to law school in another state.

The next morning Mark and Barbara went together to the cemetery where Barbara’s father Flip was buried. Once there she bent over and laid a bouquet of flowers on the grave.

But just as she straightened up again the crack of a gunshot echoed over the cemetery, and a bullet ricocheted off the edge of Flip’s grave marker.

His reflexes honed from years of ducking bullets with Hardcastle, Mark immediately grabbed Barbara and pulled her down to the ground with him. Quickly they both scrambled around to the other side of Flip’s gravestone.

The Coyote was already speeding south on the Pacific Coast Highway, and was now just barely in sight. Hardcastle pulled on the steering wheel of the Corvette and screamed out onto the highway. With the tires squealing he quickly straightened the car out and sped down the road in pursuit.

“Here — see if you can shoot the tires!” Hardcastle said, as he handed his shotgun over to Mark.

“Judge, are you crazy?” Mark shouted back. “You want me to shoot at my own car? I want that car back! It’s all I have left of Flip! ... Besides, if I trash it Barbara will kill me!”

“But how do we find out who this person pulling the strings behind the scenes is?” Mark asked.

“Simple,” Hardcastle replied. “We put someone on the inside of Cody Automotive to find that out. And where they’ve hidden the Coyote.”

“Huh,” Mark snorted. “You mean a stoolie! Someone who would be willing to risk his life to illegally snoop through the records of one of the biggest companies in America, hoping against all odds not to get caught — and then, once having done so, to squeal on said company, inviting death, disfigurement, and/or dismemberment at every turn.”

McCormick laughed. “And who are we gonna get who would be dumb enough to do that?” he asked.

Both Barbara and Hardcastle stared at him.

Don’t miss the premiere of—

at our new regular weekly time,
Mondays at 9 Eastern/8 Central