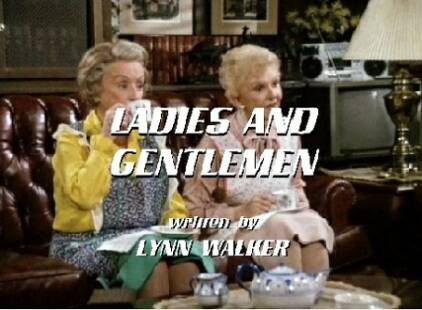 Light breezes blew through the trees, bearing the scent of the ocean, and gulls wheeled and curvetted through the bright blue sky. It was a perfect day at Gull’s Way, just right for lazing away the afternoon by the pool.

Hardcastle turned around and looked at the door to the kitchen. “Where’s that tea?” he grumbled.

“I’m sure Mark’s doing his best, Milton. Besides,” dimpled Aunt Zora, “it’s nice to just sit here and enjoy the sunshine and chat with you.”

The judge’s other aunt nodded emphatically. “We’re getting just a tad too old for all that travelling, you know, Milton. At our age, we tend to take things a little slower than we used to.”

The screen door slammed and McCormick appeared, carrying a large tray loaded with glasses and paraphernalia.

“Here we go,” he said cheerily, setting the tray carefully on the patio table. He set a lowball glass in front of each of his adopted aunts, then added paper napkins and small plates. “And some nice tea for you, Judge.” He passed over a tall glass with a different colored liquid in it to the older man. “And some of those little cookies you like and some crackers and cheese. We figured you wouldn’t want to bake your first day here,” he explained, grinning at the women.

The judge frowned. “Whadda they got? It isn’t tea.”

May sipped at her glass and sighed appreciatively. “That hits the spot. Thank you, dear, for remembering.” She beamed at Mark and took another sip.

“Ah, yes.” Zora closed her eyes and smiled after her first sip. “This is the good stuff, isn’t it, Mark? You’re such a thoughtful young man.”

Hardcastle reached out and took his Aunt May’s glass from her, sniffed at it and shot a fierce glance at McCormick. “That’s my good bourbon!”

“And I’m sure you don’t mind your aunts having it, do you?” Mark’s smile was urbane as he passed out cookies.

There was a muted growl heard from the judge, but it quickly subsided at a questioning look from Zora.

“So, you’re here for some kind of club get-together. A mystery club?” McCormick helped himself to a few cookies, but remained standing.

“Ladies’ club? I thought they baked muffins and knitted socks.” Mark sampled a cookie, considered for a moment, then added two more to his handful.

“The Ladies’ Amateur Detectives, Investigators and Examiners Society, Mark. We’ve been members for years and years.” May reached for her handbag. “I’ve got our invitations right here if you want to see them.”

Zora took up the tale. “Every year one of the chapters hosts a murder and as many of the members as possible attend that location and try to solve it. We also have monthly newsletters and a Postcard Puzzle.”

The two men looked at each other, but it was the judge who spoke. “Postcard puzzle? What’s that?”

“It’s a year-long contest. Starting in January, we get a postcard once a month with clues on it about some particular crime,” May paused to pass her invitation to McCormick, “and the member who solves it first wins a prize.”

“May won last year, in June,” said Zora proudly. “It was the fastest anyone had ever solved a Postcard Puzzle.”

“So, your club meeting downtown is to solve some kinda fake murder?” Hardcastle set down his glass and reached for a cookie. “I mighta known. But listen, don’t be dragging him —” he jabbed a thumb at Mark, “into any of these shenanigans. He’s got finals coming up in about a coupla weeks.”

The aunts both nodded vigorously. “We know, Milton,” said May. “And we’ve already planned out dinner tonight to help.”

May reached out and patted Mark’s non-cookie-holding hand. “Fish is brain food and we’re fixing a nice Sole Amandine. We thought maybe lobster or crab tomorrow. Not that you need any help, Mark dear.”

“Thanks, Aunt May, but I think I need all the help I can get.” McCormick smiled at her. “In fact, I gotta go hit the books right now.” He leaned down a gave May a light kiss on the cheek. “But I’m glad you’re here.” He then repeated the gesture with Zora before heading off toward the gatehouse, cookies in hand.

Hardcastle sat in thought then looked up hopefully. “He needs protein, too, you know—for stamina. Those finals are rough. Maybe we oughtta have some steaks or pork chops tomorrow.”

“And a shrimp cocktail before,” added May triumphantly.

The judge gave up with a shrug. “Okay, fine. If you cook, you get to pick. But,” he waved a finger at them seriously, “he’s gonna be busy, so I’ll take you wherever you need to go.”

McCormick carefully helped Aunt May out of the truck, then extended a hand to Zora. “Watch your step here.”

“Thank you, dear. That little step is much better than the wooden box we had before.” Zora straightened herself and looked up at the ornate face of the Empress Hotel before them. “Well, it certainly is imposing.” They all stared up at the six-story hotel, ornamented with balconies, flags, even some gargoyles.

May was studying a sheet of paper in her hand. “It says we’re supposed to meet in the lobby for orientation. We’ll be handed our clues and itinerary.”

“Well, I’d like to take a look around. There’s no harm in scoping out the territory first, is there?” Zora twinkled up at McCormick. “We’ll be fine, dear. You go on to the library. After all, that’s what you told Milton you were going to do.”

Mark grinned back her. “I really do need to check some things at the downtown law library. I’ll be back in … what, four hours, you said?”

May nodded at him, then started off to the side of the hotel. “They’re going to give us lunch at noon. Come on, Zora. Let’s get a head start on The Black Tulip Murder!”

The alley was narrow, dark, and cool. There was no conspicuous garbage lying around, but the blue Los Angeles sky seemed very far off as the aunts picked their way cautiously along.

“Isn’t that Margaret Lessingham?” Zora peered ahead down the alley. She waved tentatively, then shook her head. “She must not have seen me.”

“Mmm, what?” May looked up from her careful note-making. “Who, where?”

Zora gestured down the darkened alley running alongside the hotel. “I thought I saw Margaret Lessingham up there, but she had her back to us. But I’m almost certain it was her.”

May went back to her sheet of paper. “I wouldn’t be surprised if she’d had the same notion we did. She’s won the Postcard Puzzle twice now, so she’s probably doing the same groundwork we are. Where does this alley lead, to the rear entrance?”

“I think so,” answered Zora, making her way carefully along. “You’ll notice there aren’t any windows on this side of the hotel. No escape routes.”

“Yes, and very little lighting. Makes it difficult to find clues.” May wrote another short note, then started to search in her capacious handbag. “Now where is that flashlight?”

The sudden sound of an angry voice brought both women’s attentions to the corner at the end of the alley. They looked at each other, and without a word, crept closer to the corner. One voice was a nearly continuous mutter, but the other suddenly rose and the words became discernible.

“I’m sorry!” a male voice shouted. “It’s going to be done and there’s nothing you can say or do to change my mind!”

A silence fell and the aunts sidled, against the hotel wall, even closer to the corner.

The quiet voice murmured briefly, then May and Zora heard the loud voice gasp.

“No! You can’t!” it was a combination of fright and pleading.

Then they heard a shot, immediately followed by a loud thud and footsteps fading away.

The aunts looked at each other and May said in a worried tone, “Is this the beginning of the mystery, or …?”

Zora took a deep breath and replied, “I think we’d better look,” and peered around the corner.

May peeped over her shoulder and her mouth opened in surprise. “That looks like real blood!”

The body of a man in a dark suit lay supine on the ground in front of the steps leading up to the back door of the hotel. A pool of blood from a wound in the chest spread quickly.