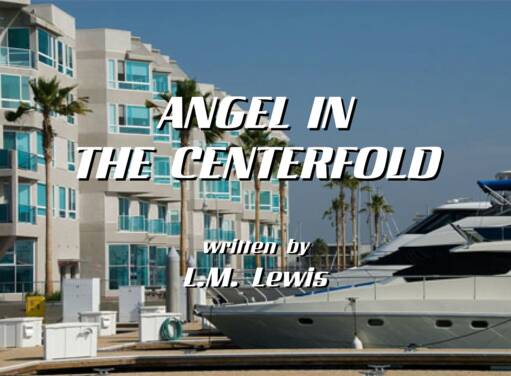 Author’s Note: This is a standard-length script for a one-hour episode of Hardcastle and McCormick, following the format of the original 1983-1986 versions. Because it is intended for readers, rather than a director and actors, some conventions were dispensed with, including the cast and set lists. I’ve also injected more than the usual number of parenthetical directions—surely the bane of skilled actors everywhere (because there are no actors to annoy here), and I used a minimum of camera angles.

There’s a bike rack outside and some college types lounging at the bus stop. A cute co-ed breezes by, heading for the door. She’s ANDREA PORTMAN, early twenties, blond, above-standard looks, even for southern Califoria, but it’s all understated: not much make-up and her hair cut to a sensible shoulder length. She’s got a BINDER tucked under one arm and a shoulder bag on the opposite side. She hits the door looking like she’s in a hurry.

Mid-morning, the coffee crowd. PORTMAN wends her way between tables like she knows her way around. She’s making for the counter, where a middle-aged guy, NATE, is toting figures on a pad.

(turns and rings a “no sale” on the register)

(pulls out an envelope and hands it to her)

She stuffs the pay envelope into her binder and starts to turn.

Oh, wait a sec. Somebody left something for you.

He’s bends to get something from under the counter, then back upright a moment later and hands her another envelope. This one’s business-sized and just a little thicker. It’s addressed “Andrea” in neat block print. Portman takes it hastily.

Some guy. ‘Bout your age. Said to give it to you.

(glances up at wall clock and twitches)

She nods without pausing, hits the door and is through.

It looks like an ivy-covered and traditional bastion of graduate education. There’s a steady stream of students heading up the steps. PORTMAN is coming from behind, but taking the steps double-time where she can.

It’s an old-fashioned auditorium, with the rear entry a full story above the front of the room. It seats about 150 and is three-quarters full with students shuffling papers and getting settled. PORTMAN enters the back, looking relieved to have made it on time. She chooses a seat on the aisle one or two rows down from where she came in, and sits, her binder in her lap.

ANGLE—AT PORTMAN, FROM A SHORT WAY FURTHER DOWN THE AISLE IN FRONT OF HER

She opens her binder, takes out the thinner envelope, opens it, studies her check briefly with a jaundiced expression, then stuffs it in her pocket. The other, thicker envelope is sticking out of the binder pocket. She frowns at it, then pulls it out, laying it down and running her finger under the flap. She looks puzzled as she takes out a piece of glossy paper folded widthwise several times. From the camera’s position we see some ad copy—a bottle of booze perhaps. After the page is unfolded once, Portman’s frown deepens. She cocks her head a little sideways and finishes the unfolding. The piece is longer than a single magazine page. Portman’s face goes white. She drops her hand, still clutching the page, down onto her lap, hastily looking around as if to see if anyone saw what she saw. She shoves it back into the binder hastily, envelope and all, gathers her things clumsily, gets to her feet, and exits via the rear door.

PORTMAN barrels through the door, descending the steps with her eyes down as if she doesn’t want to be recognized, and collides with McCORMICK, who was hustling up the steps, equally preoccupied with not being late. Portman’s BINDER goes flying, its contents spilled across the steps.

(stoops, starts to gather things up)

I shoulda been looking. My fault.

It’s no use. McCormick already has his hands on the glossy page.

As he picks it up it starts to unfold. We see the same ad as before. He glances at his side of the paper and then is riveted—except for maybe a quick check between what’s on the sheet and the girl in front of him. He remembers his manners and folds it hastily, handing it over with the rest of her stuff. She’s mortified. Undone. She silently accepts what he’s giving her.

Obviously not. There’s a half-beat and her shoulders slump. She’s crying. McCormick glances past her to the doors of the building. Everyone else has entered. They’re alone on the steps. Portman is still crying.

Come on. You look like you could use a drink.

She lets him shepherd her down the steps and away from the building.

Not the one Portman works in.

This one has an older crowd—regular Joes drinking regular joe. McCORMICK AND PORTMAN occupy a booth. The waitress brings cups and departs. McCormick has apparently been waiting for that before opening the conversation. Portman beats him to it.

The guy with the flashy car who did some time in prison.

For a moment his face is unreadable, then he manages to produce a smile. It seems as though he’s had practice fielding this question.

Then it’s true what they say?

That depends. What do they say?

That some crazy retired judge bet his buddies he could take an ex-con and turn him into a lawyer.

What about you? Putting yourself through school with a little modeling?

There’s a moment of silence, the kind that comes right before the storm, and then:

I’ve earned every penny of my tuition. Books and rent, too.

Striking resemblance, though. And, well, you seemed kinda upset.

I’ve never seen it before.

(beat, then she speeds up a little, needing

I don’t even know where it came from. Somebody left it for me at work.

Portman digs in the binder and pulls out just the envelope—not the page—glances at it, opens it, and looks inside. She pulls out a small sheet of paper that she must have overlooked earlier. She stares at it, then passes it over to McCormick.

In block printing it reads: “I know all about you.” There is no signature.

If it is, they’ve sent it to the wrong girl. That is not me.

Yeah, and I don’t even have a career yet.

There’s a shared moment of awkward silence and then:

(making a show of glancing at the wall clock)

Look at the time—I’ve got to run.

Need a lift? I’ve got this flashy car…

They rise. McCormick digs in his pocket and puts money on the table. They head for the door.

McCormick and Portman part outside the door. Camera on Portman as she heads down the sidewalk. Ten steps down she pauses, reaches into her binder again, and pulls out the glossy page. She looks both ways quickly and steps back against the walk before she half opens the fold and takes a peek. She stares hard for a moment then looks up suddenly.

McCormick is down the street, near the corner, waiting to cross.

He looks up as she runs toward him.

The Coyote is parked in the drive near the fountain.

The front door opens further and we see McCormick is leading PORTMAN in. She looks as if she might have been crying again. They head for the steps to the den, McCormick in front.

Hardcastle is at his desk, doing something that involves papers. He’s looking down.

This is Andrea Portman. She’s in my class. Andrea,

this is the crazy judge.

Hardcastle scowls at McCormick but changes that to a welcoming smile and a nod for Portman.

Milt Hardcastle. Pleased to meet ya.

(he’s on his feet halfway through that, but lets Portman lead on the handshake, a perfect gentleman)

She has a problem.

Hardcastle raises an eyebrow at McCormick, and waves Portman to a seat, before sitting down again. He’s all ears.

No demands so far, just this.

(hands over the piece of paper with the printing on it)

Hardcastle scans it and then looks up.

So what is there to know?

I’m a law student, like Mark said. I’ve always worked side jobs—I’m putting myself through school—but nothing like…

She pulls the glossy page out of her shoulder bag, now folded just so. Head and shoulders are visible. She gets up from her chair and passes it to Hardcastle, staying close enough to point. He looks at it, then her. He seems to have gotten the drift.

But it’s not me. I’ve never done anything like that.

Close resemblance. Your hair’s shorter. Okay, so it’s not you.

That’s what I said.

Except for one thing.

(she’s fiddling with her neckline)

Hardcastle looks mildly concerned, but after a moment of fishing just inside her collar, she pulls out part of a fine silver necklace chain. Dangling from the end of it is a piece of jewelry, something with an unusual outline, perhaps a Lorraine cross or a Celtic knot.

Hardcastle peers closely, then opens his desk drawer, pulls out a magnifying glass and studies it again, before returning his gaze to Portman.

The same. What are the odds? I’ve had it for…a long time. I’ve been wearing it for years.

Looks like a dead ringer to me—the necklace and the girl.

Portman nods and returns to her seat.

You ever go out on a date and thought maybe you had one too many to drink?

It wouldn’t have to be booze. Someone mighta slipped you a Mickey.

No blackouts, not that I can remember.

I think the whole point is that you aren’t supposed to remember.

(heaves a sigh and hands the picture back, still carefully folded)

It’d be a lot easier to figure out what happened if we knew when and where that photo was taken.

How old are you?

How long has your hair been short?

Since I started college. I was eighteen.

So, on top of everything else, the girl in that photo may be underage.

As much as I can’t believe it, “the girl” in that photo must be me. I need to know how this happened.

Okay, then, we’re gonna have to do a little research.

Hold on this, and,